11 Types of Tweets That Generate Attention to Your Profile 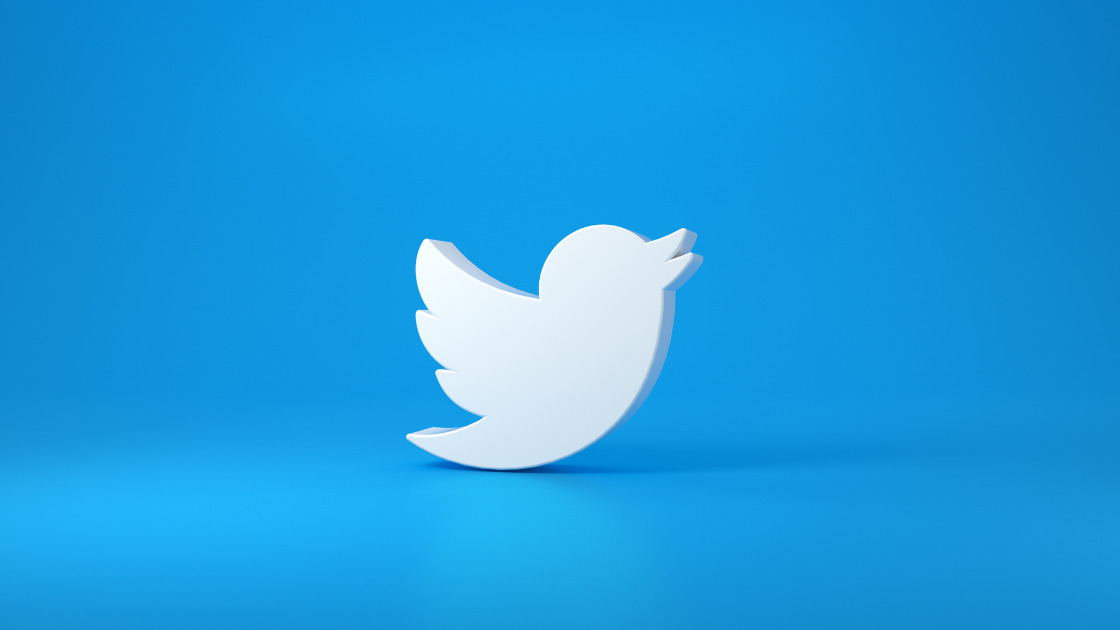 Have you ever wondered how some people seem to get massive amounts of engagement? Wonder no more. They’ve all cracked the type of tweets that gets them sweet engagement.

1. Us vs Them Tweets

Find some enemies. Antagonize them. Who are these enemies? Usually those in power, politicians, people in suits, famous people with dumb opinions, and ideologies, big evil corporations, and other important people Twitter on.

How to use these kinds of tweets? For starters, avoid disparaging individuals unless they’re rich and powerful. Also, never insult people’s immutable characteristics like gender and race – or you’ll get banned. Understood?

Once you internalize, think of an idea or group of people you want to antagonize and do so.

Here is an example: 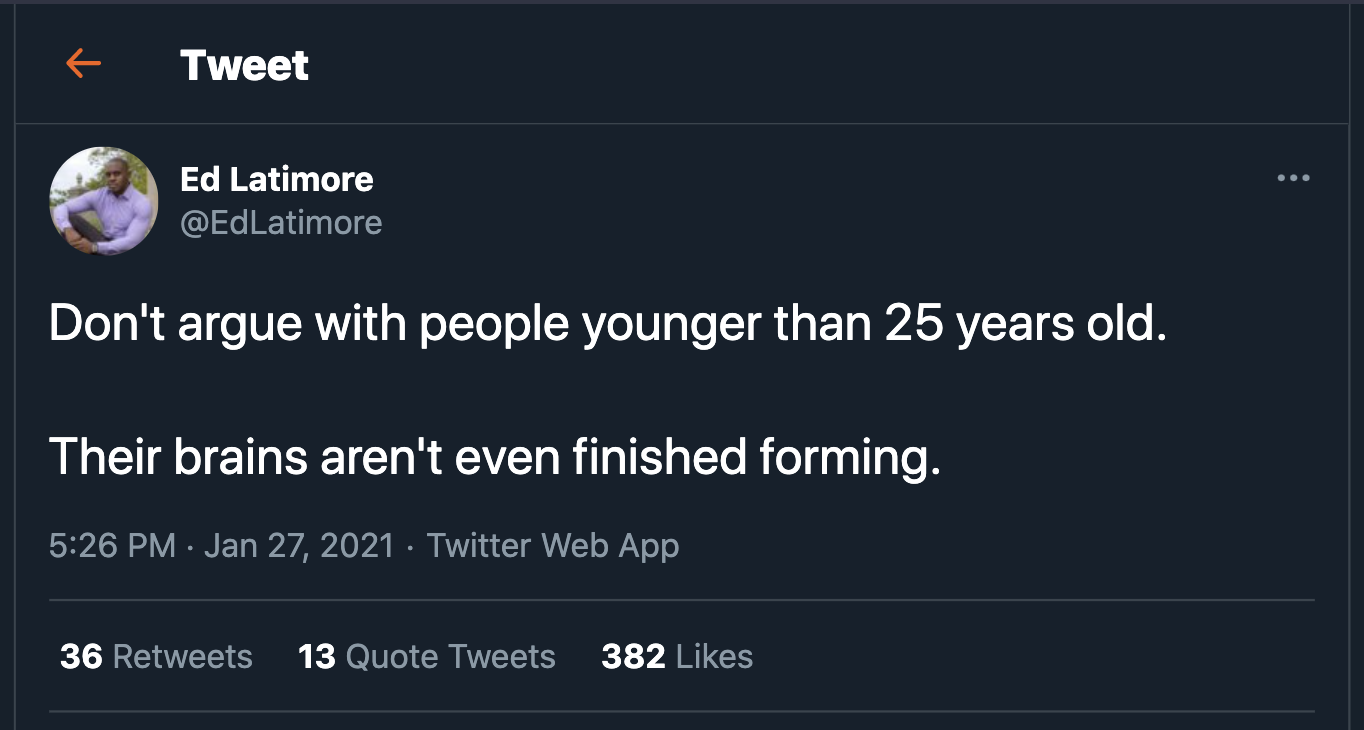 Why do they work? because you either laugh or get small bursts of dopamine when you read these tweets. Humans are tribal. We all think our group is better than other ones.

Therefore, when we see people in our tribe taking a jab at groups we consider adversaries, we feel good. Now, what kind of monster would feel good when their foes are made fun of on the internet?

The answer to this question is EVERYONE. Don’t debate me. Debate science. Ok?

2. Say What Others won’t

Ever heard the term “the silent majority.” Well, that’s a real thing. Most people go to Twitter to consume, like, and retweet what they’ll never say aloud.

When you tweet what you know everyone is thinking but don’t dare to say, you get them to trust you and RT your ideas.

Here are a few examples: 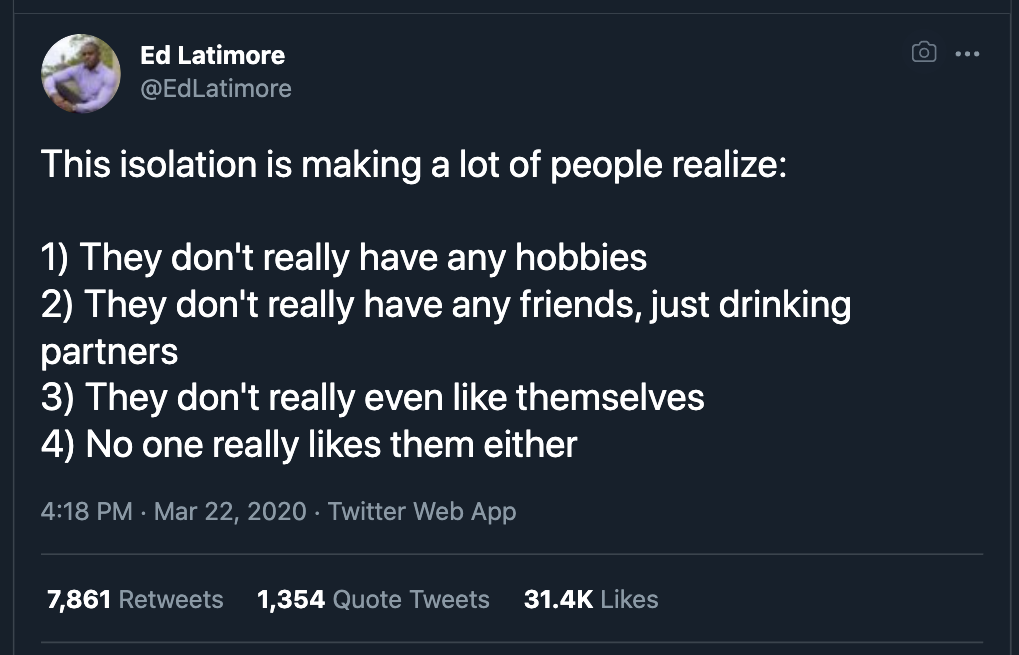 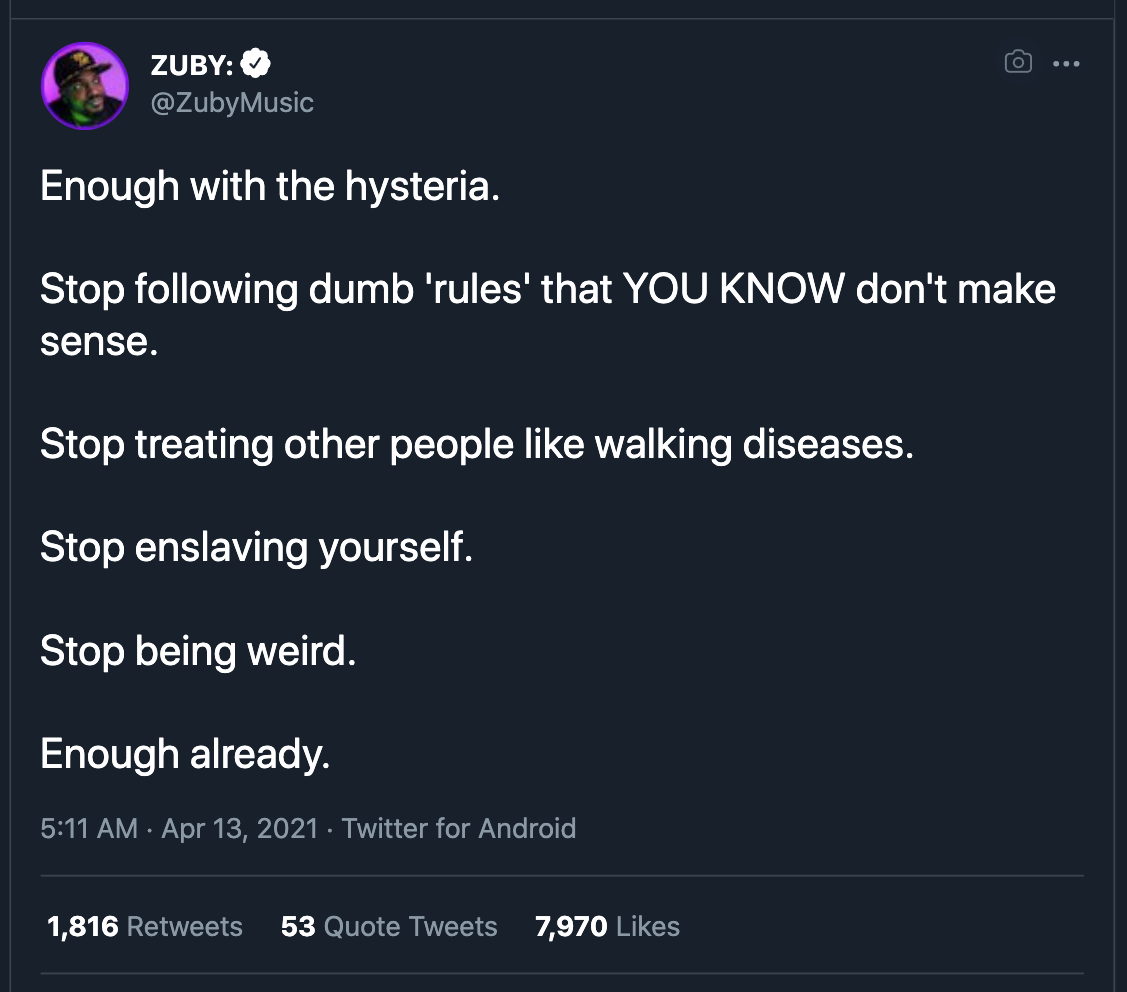 Why do they work? People love courage. When you say aloud what they wouldn’t dare to say, they love the fact that you did. It’s just a human thing.

If you see a hashtag, an uproar, a meme, or a photo going viral, ride the wave, baby. Screengrab what you see and use it to dominate.

That said, you must act fast. Once the popularity of the trending topic dries off (which usually takes a day or two), these tweets won’t get a lot of traction 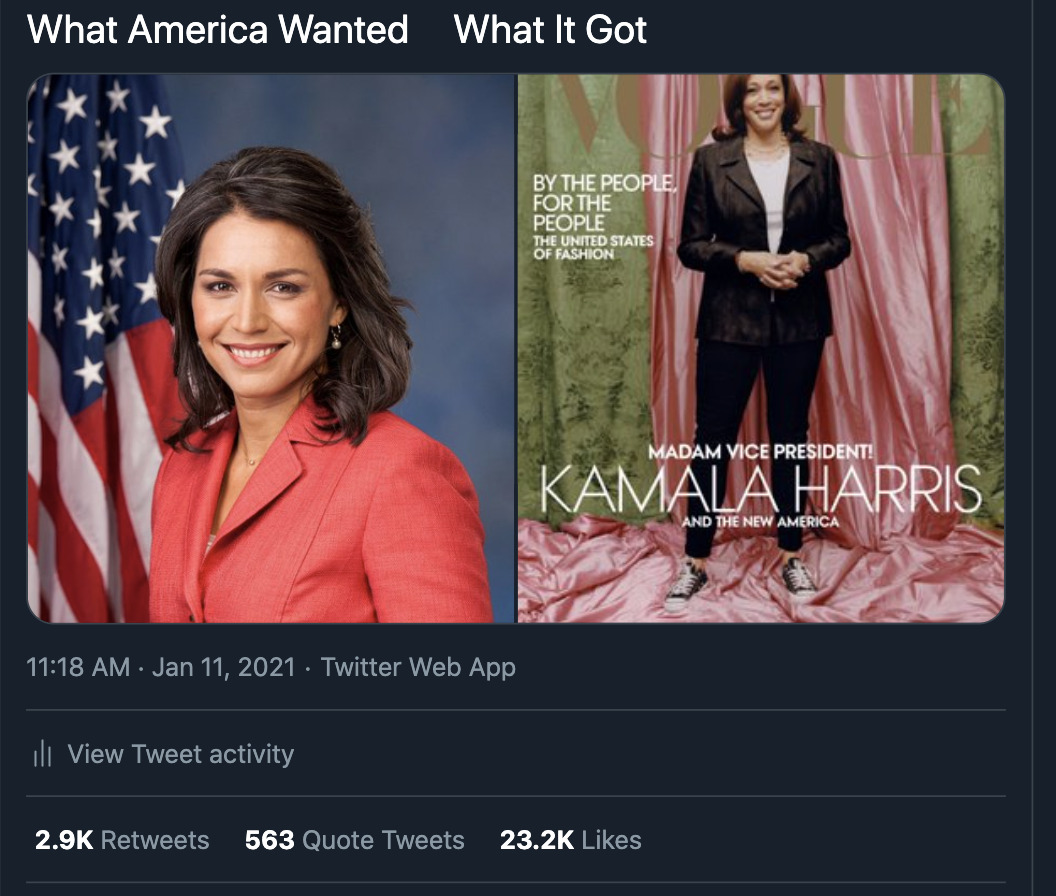 Why does it work? They work because these ideas are popular at the moment. People have a clear desire to be informed and let others know they are.

When they RT the tweet, they let others know they are up to speed with what’s happening in the world.

Hyperbolic Advice tweets leverage how Twitter users react to hyperbole. So what you do is to take any advice you’ve ever received and take it up a notch.

Exaggerated the advice to the point where it sounds a bit ridiculous – just don’t make a fool of yourself by exaggerating too much. 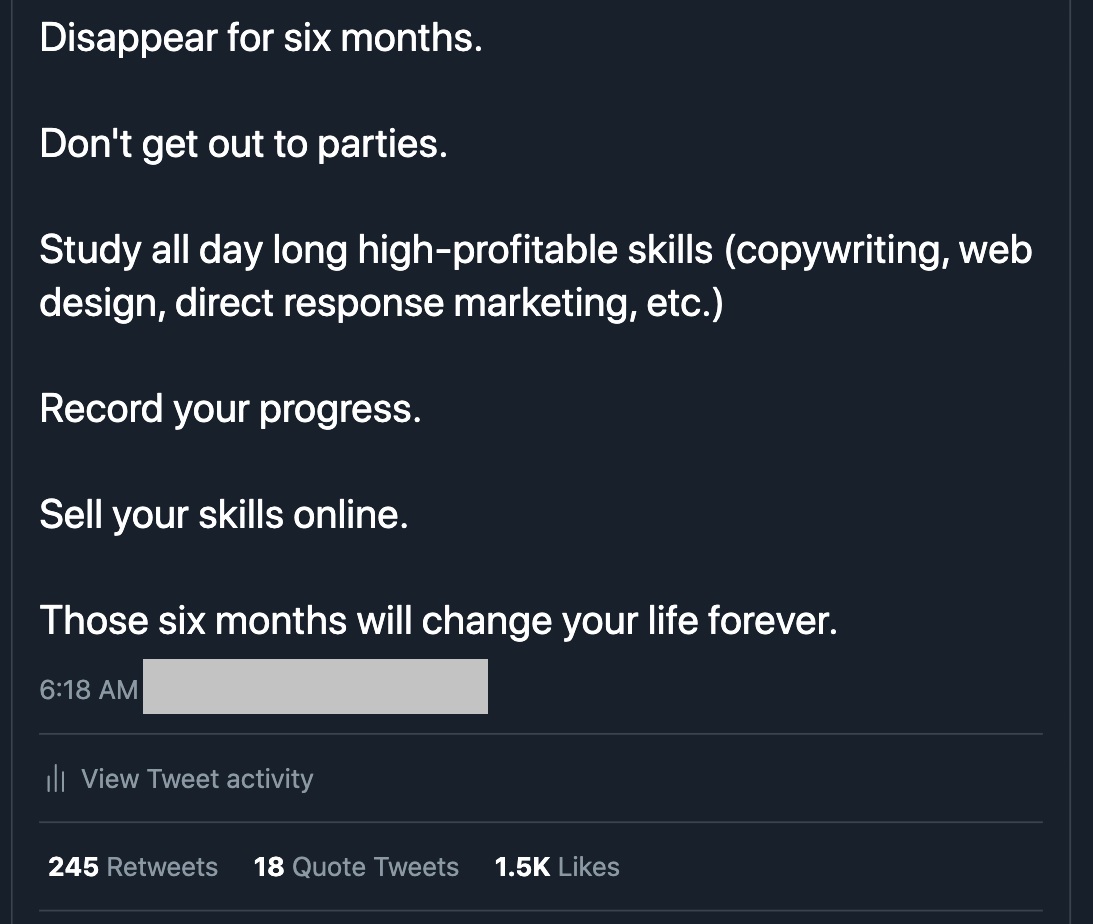 Why does it work? A lot of people will find the advice brilliant or stupid. This drives engagement. They’ll reply to your tweet. They’ll RT with comments on your tweet.

They’ll engage. That said, brace yourself for the barrage of criticism these tweets usually attract.

To craft these tweets, find “common sense” advice (like “go to college, get a job, work for 40 years, and retire”), make fun of it, take it out of context, or provide a different, better alternative. 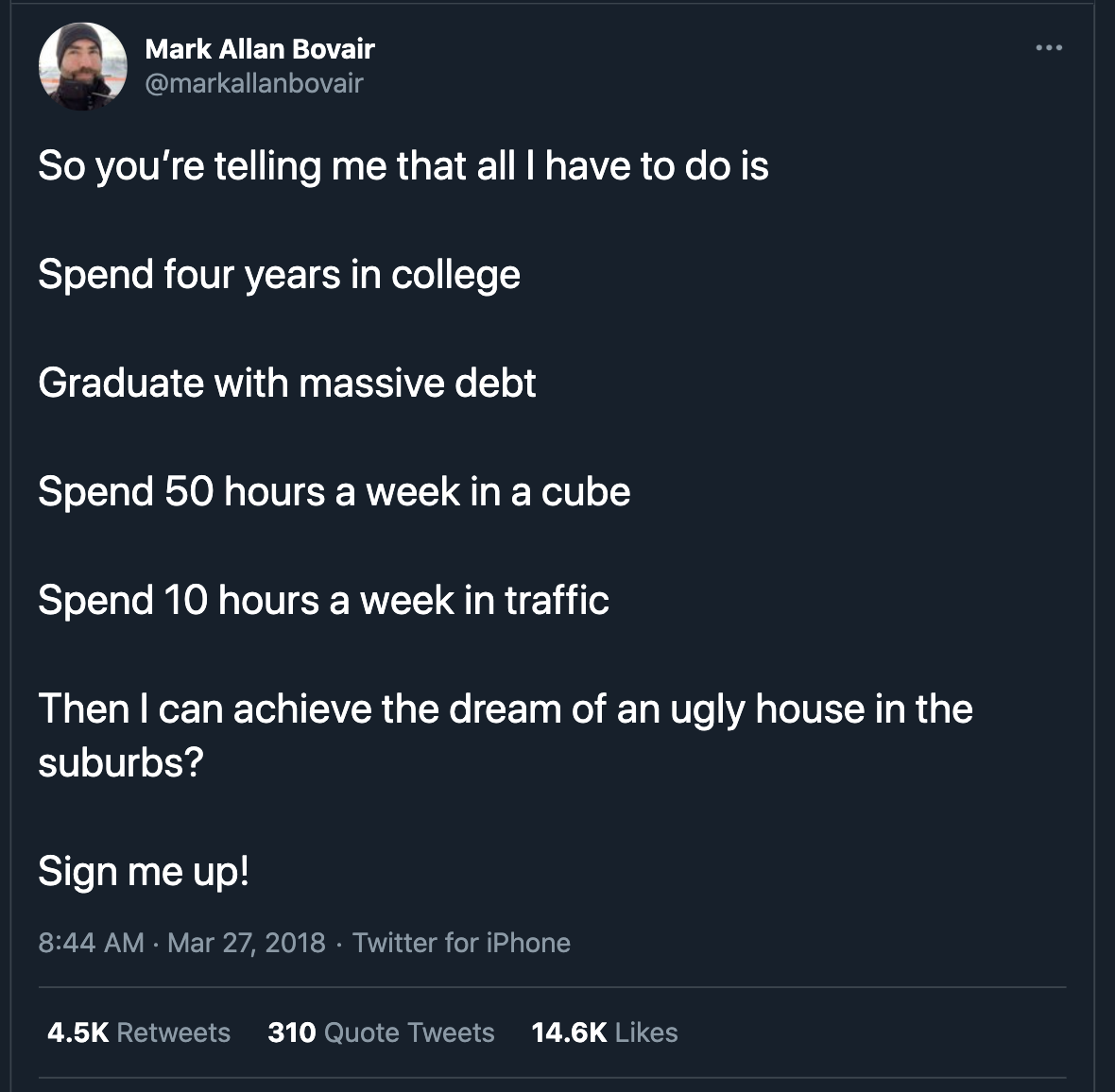 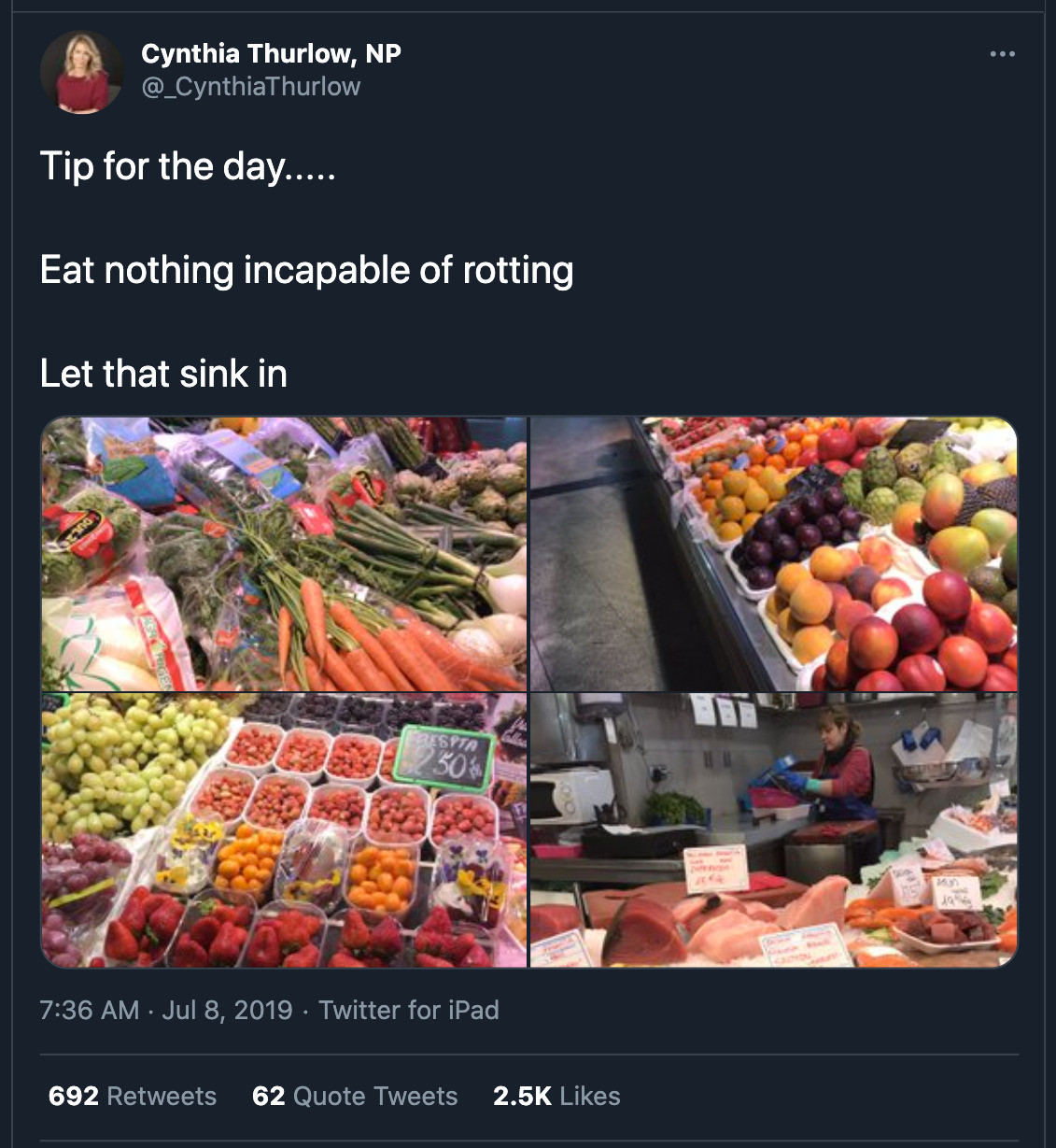 Why does it work? There’s a cognitive bias named Cognitive Dissonance. Wikipedia defines it as “the mental discomfort (psychological stress) experienced by a person who encounters contradictory beliefs, ideas, or values from the one he or she holds.”

“Huh? What on earth is Wikipedia saying?” In simple terms, when people encounter an idea they disagree with, they’ll experience mental discomfort and sometimes even physical.

This discomfort leads your readers to either disagree or pause to think about the idea for a while. If they disagree, sometimes they’ll reply to your tweet, giving you sweet engagement.

If they somehow changed their minds regarding their previous preconceptions, they might RT the tweet or reply to it, also giving you juicy engagement.

Finally, some of the people who agree with you will likely RT the tweet. It’s a great way to drive engagement.

To craft anaphoric tweets, repeat the first couple of words at the beginning of most of its sentences, and close with a short, punchy last sentence.

Take a look at the examples below 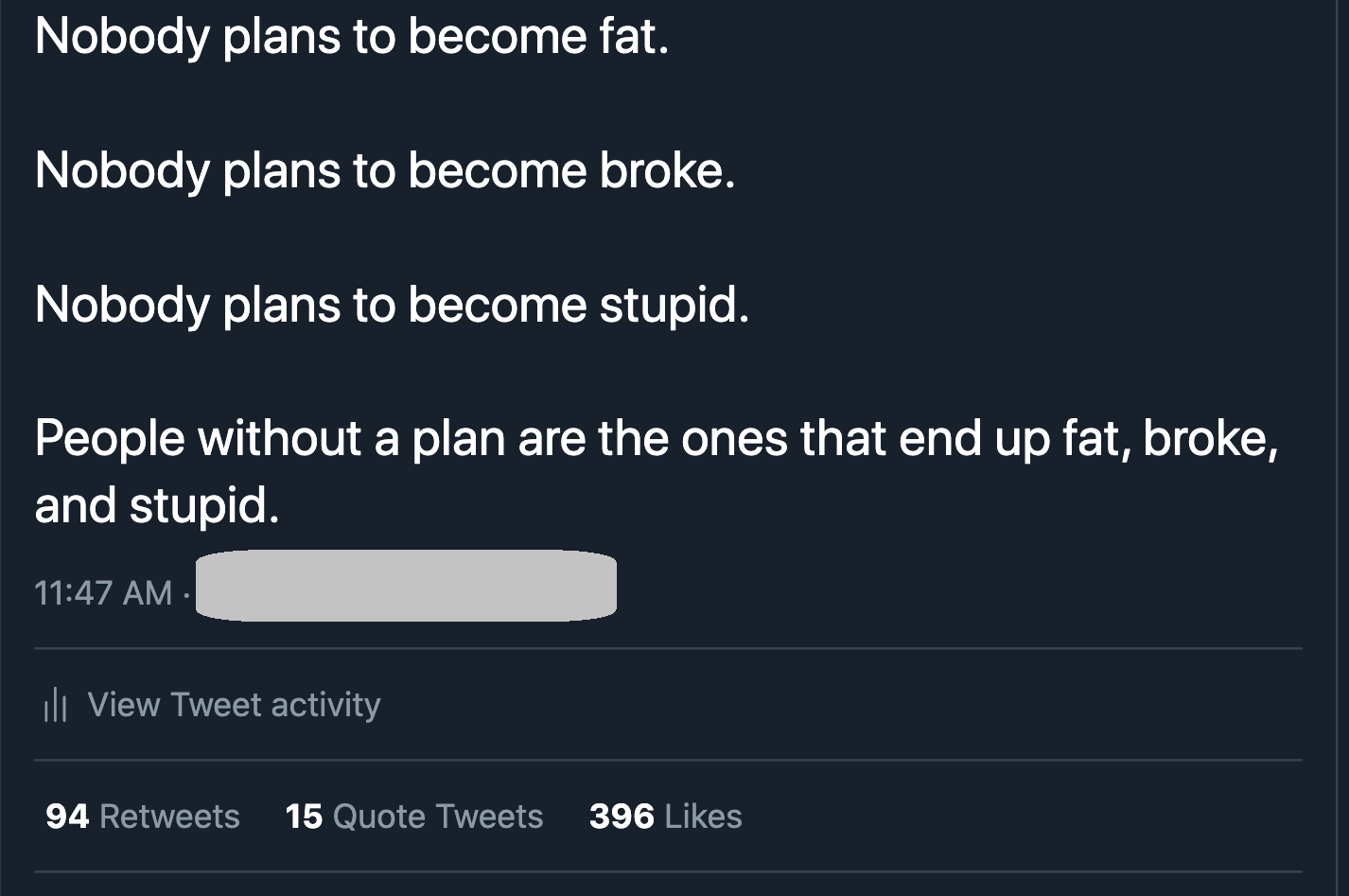 Why does it work? The tweet emphasizes a point, making the idea easier to remember. It also makes the tweet simpler to read because of the repetition you use at the beginning of its sentences.

Think about recurring events that happen to you. What are the things that usually happen to you at work, at home, at the gym, at a restaurant, at a government office, or at the supermarket?  Write about it. Then tweet it.

Why does it work? “Oh, that also happens to me. Hahahaha!” *retweet* Do I need to say more?

8. Personal Stories Of Success Or Transformation

Your followers love to see you win. Therefore, post about your successes and transformations. Add photos, if you have some. If you have before/after photos, make sure the difference is evident, like the one P.D. Mangan posted (see example below). 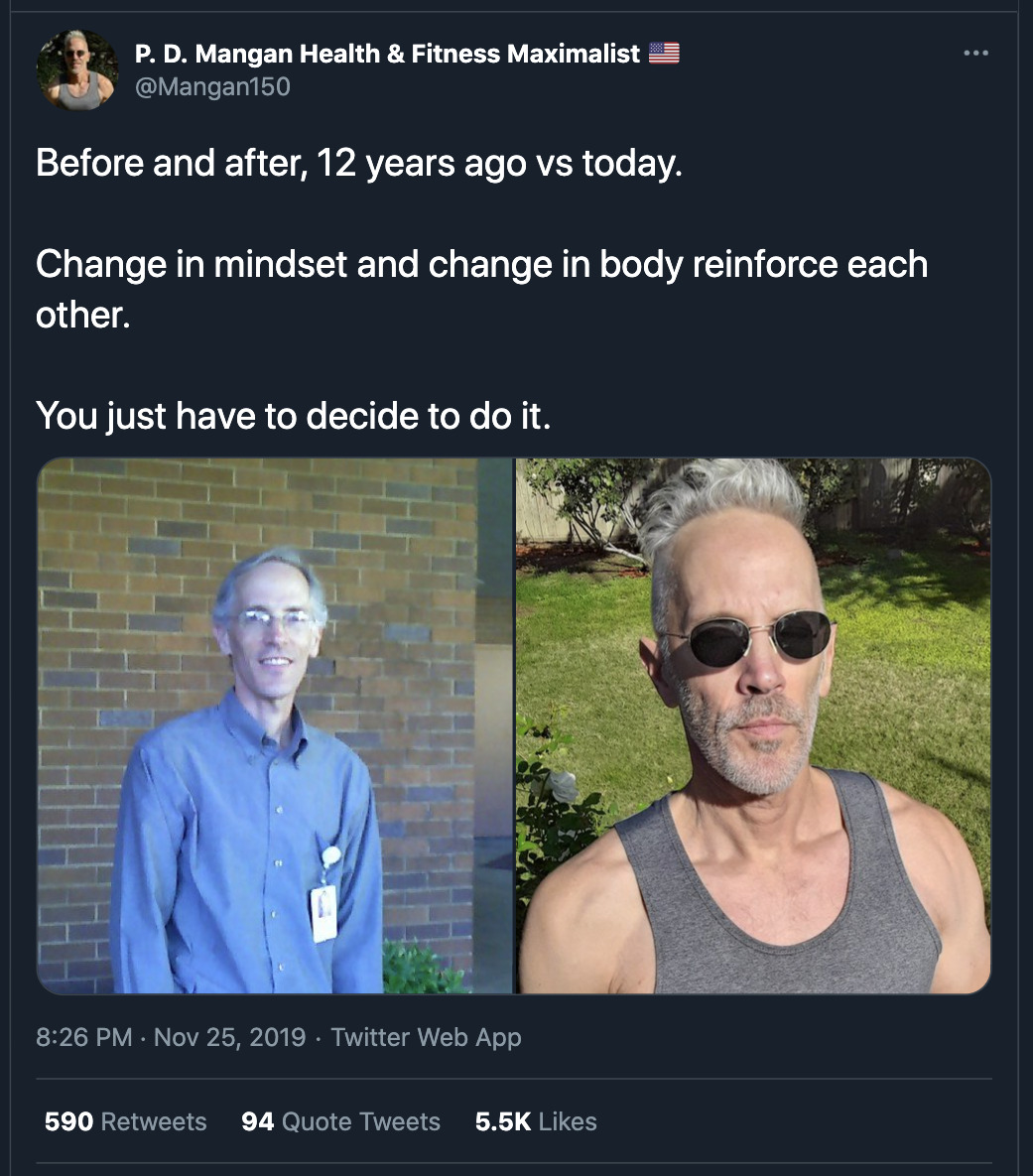 Soft teaching is when you state WHAT to do without saying HOW nor WHY to do it. For example, think about the following statement:

“If you want to make money while you sleep, invest your money in dividends stocks.” Ok… how do I invest? Why should I invest in dividend stocks instead of investing in Bitcoin? Can you see what I mean?

Listicles are also a great way to soft-teach. And, if you want to expand on how to actually use the ideas you listed, expand by writing a thread. Take a look at what I mean down below. 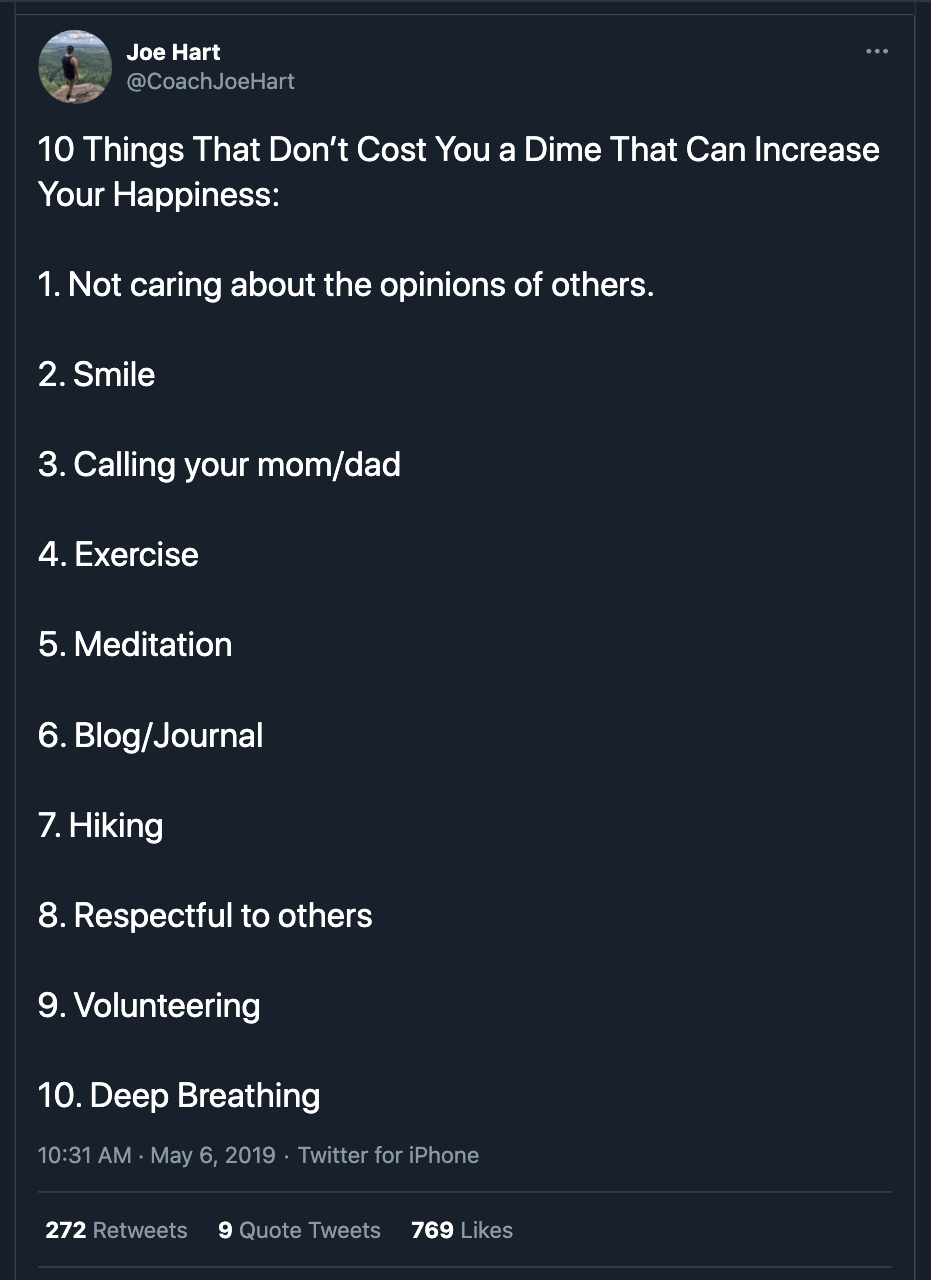 Why does it work?  Soft-teaching makes people feel they learned something (hehe). It gives them a tiny dose of dopamine! If you want to make your listicle tweets extra value for your audience, write a thread explaining each of the list’s items.

On the other end, we have listed. And according to Science™, people love lists because:

To illustrate this, imagine you just deadlifted 300lbs and then you carried 200lbs. That 200lbs will feel significantly less heavy than if you had lifted them before lifting the 300lbs. Makes sense?

Now, a question arises…. How do we use the Contrast Principle in a written or visual medium?

Visual: use before and after photos.
Written: use stark comparisons. 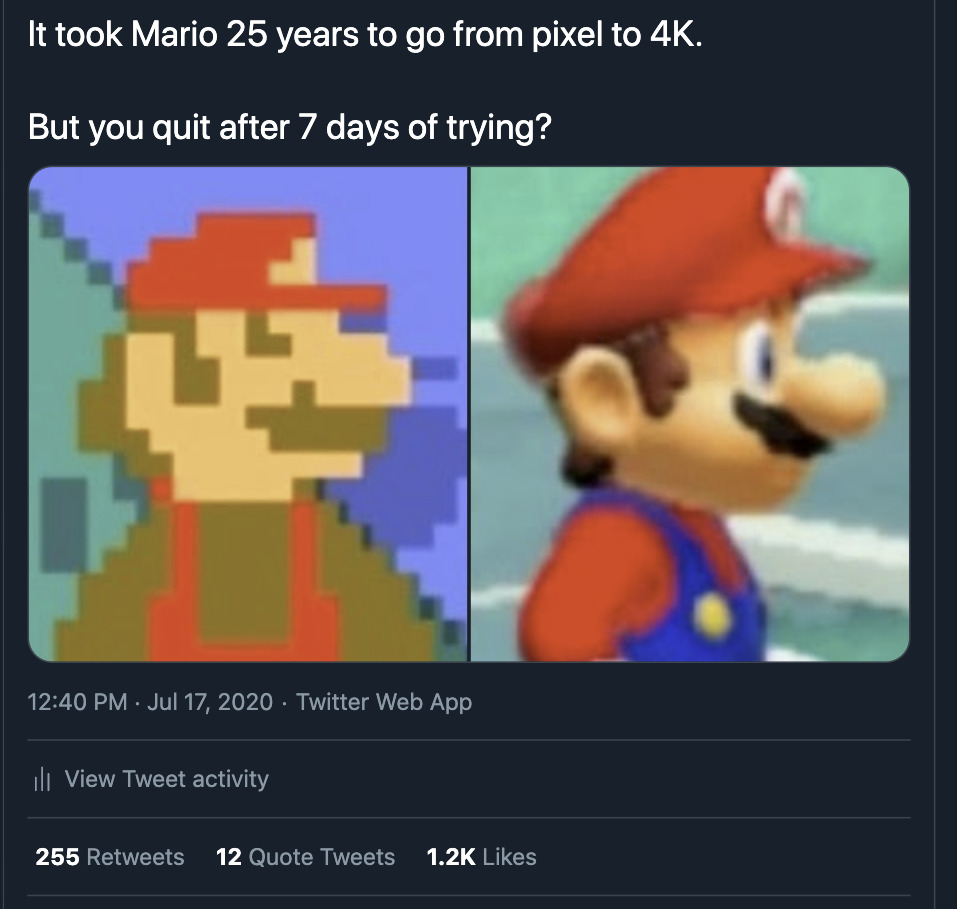 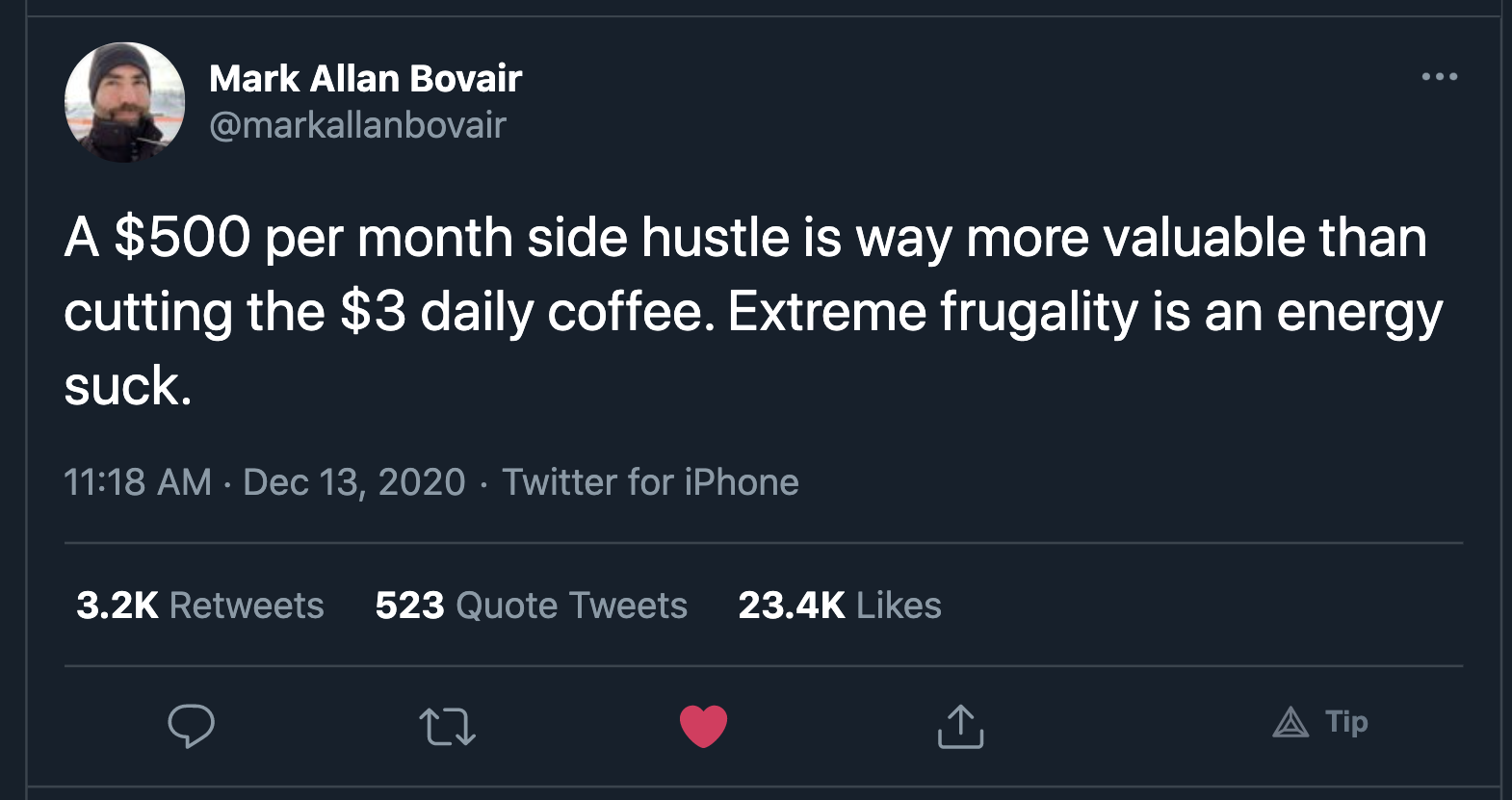 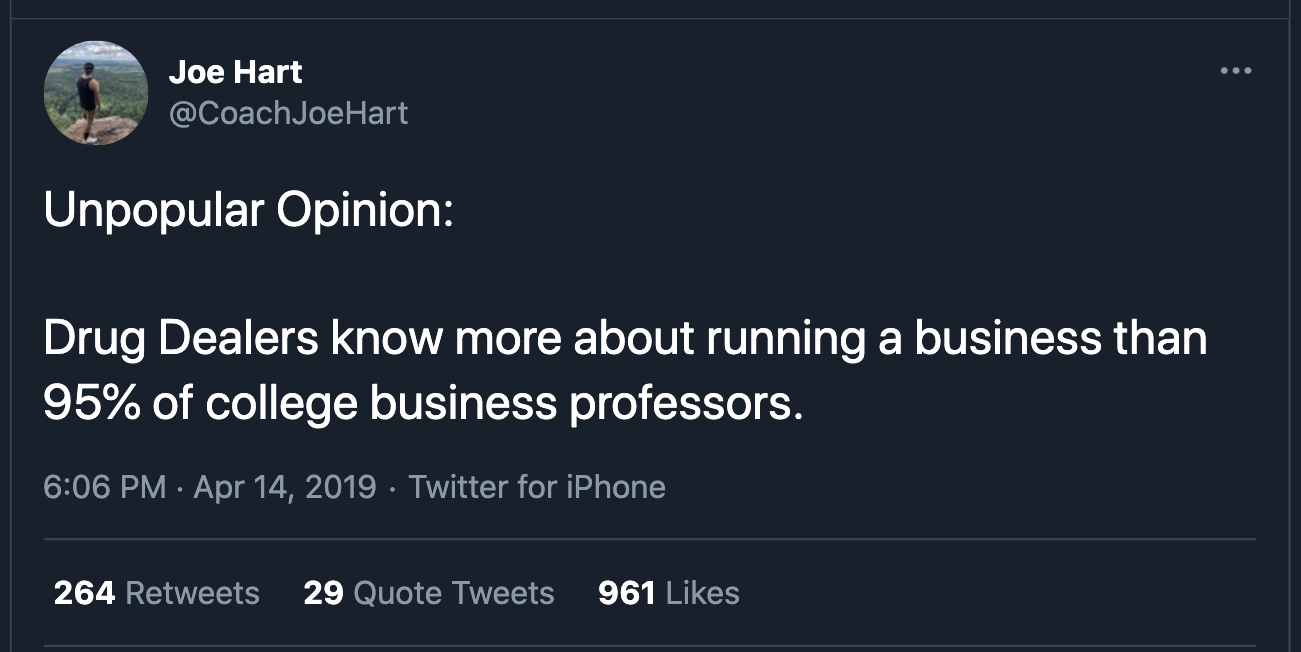 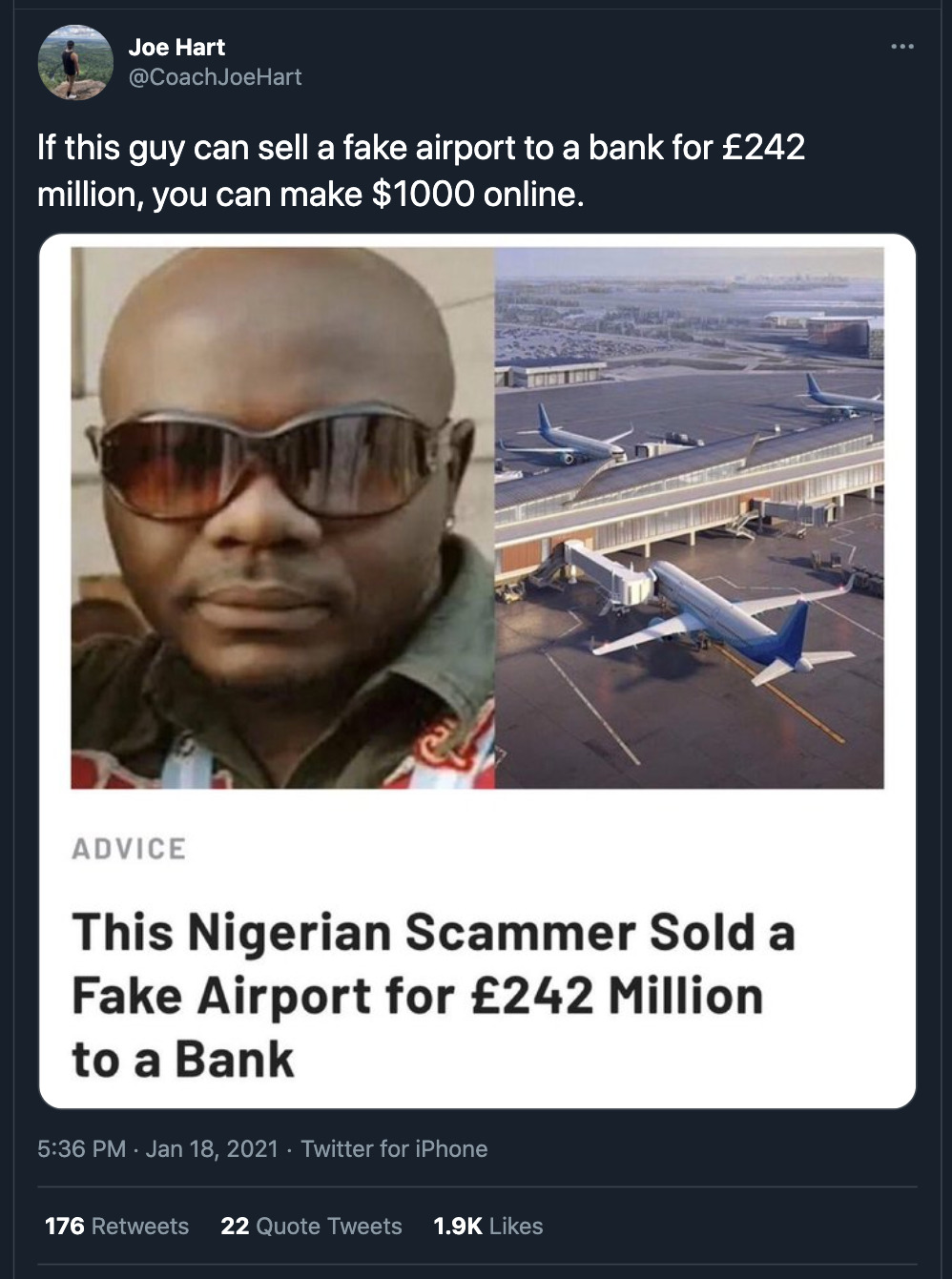 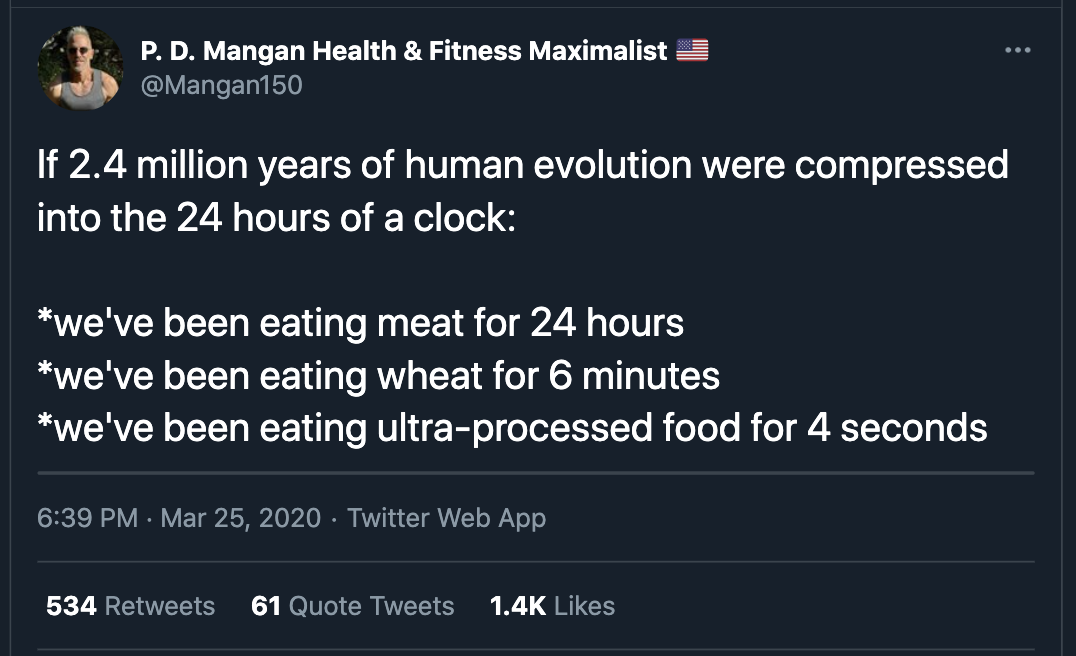 Why does it work? The first idea serves as an anchor. Once that idea is anchored, the second one will seem much more different than what it is.

Let’s say you put a hideous painting next to a gorgeous one. The pretty one will seem more beautiful than if you see it in isolation.

Have you ever heard of Aggregation Websites? These websites provide links to articles, sources, and resources on specific topics.

Your job is to collect resources about a particular topic and write a thread where you link to each of them. The hard part is finding the resources – unless you’re one of those obsessively organized people that have their links categorized by color, name, topic, and whatnot. 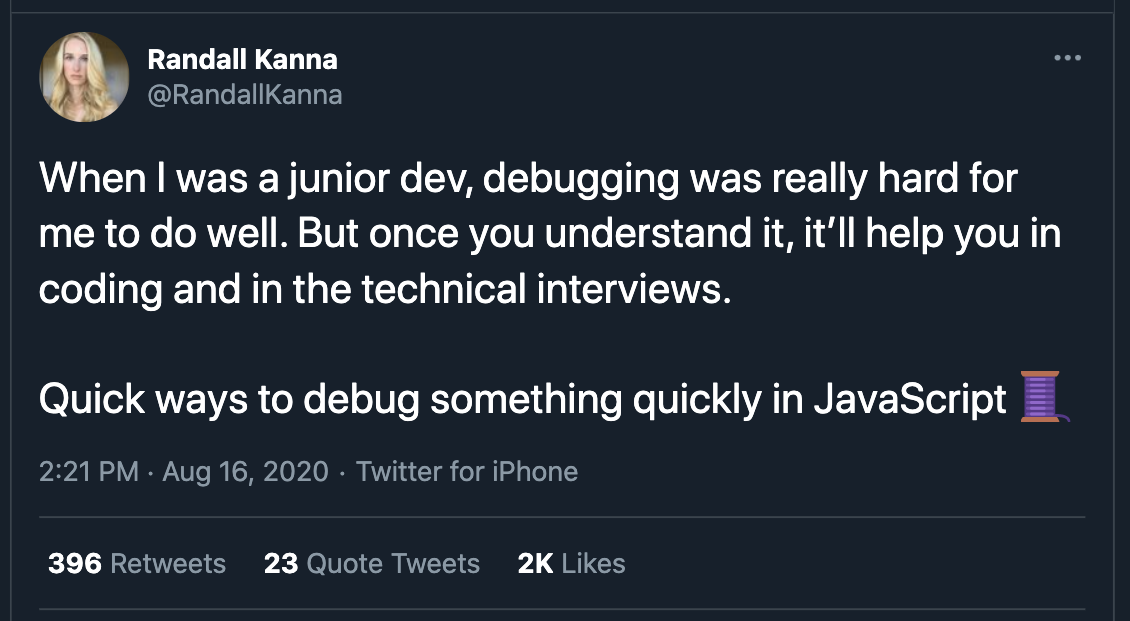 Why does it work? People love saving time. Listing the resources will help them save time. When you give your audience a list of resources to learn any given skill, you’ll get praised, likes, and retweets.

How To Write A Twitter Thread : Art Of Writing

We expect that by reading this article, you have gained an understanding of the many types of tweets you can send right away to accelerate the growth of your profiles and increase your sales in a short amount of time.

How to Grow Your Network on Twitter with DMs

11 Types of Tweets That Generate Attention to Your Profile