After discovering this you too will say…

Best part: you can use it in everyday social conversations… as well as serious business meetings… to have an “influential hold” over other people…

And yet: nobody will ever feel like you are putting ideas in their head or influencing them in any way…

Control” To Their Mind & Emotions And

The Decisions You Want Them To Make

You never want them to know you are putting pictures in their head or triggering certain emotions.

The SECRET is for them to think (believe) they are “seeing” the mind-pictures that only they want to see and feeling only the emotions that they would naturally feel.

And that is a skill that very, very few people have.

Sure you have storytelling naturals like “Mr. O”, John the CEO and trial lawyer Gerry Spence — but even they are not privy to the NEW “fusion hypnosis” that combines my advanced covert hypnosis secrets along with the kind of hypnotic storytelling secrets you are going to get from the master storytelling hypnotist I’ve teamed up with.

The name of the master storytelling hypnotist is Robin Manuell.

And it is Robin Manuell that I consider to be the hands down the world’s BEST storytelling hypnotist.

Well, part of the reason his Robin’s unusual “journey” into the world of hypnosis. You could say he took a bit of a detour.

See Robin came to the field of hypnosis in a rather roundabout way. Psychology and computer models were his focus of study at Sussex University in England. Then, in his final year, he specialized in the rather “off-beat” subjects of…

Sounds like Robin would be more suited to Harry Potter’s Hogwarts, doesn’t it?

But Robin is actually a very practical “real world” person with business shrewdness.

During his twenties, Robin ran a theater company. And he first got interested in and began practicing hypnosis to improve his acting abilities.

Shortly thereafter, John Grinder (one of the co-founders of NLP) invited Robin to work with him personally. Robin studied directly under the watchful eye of both Grinder and Richard Bandler.

Over the years, Robin developed a unique approach to hypnotherapy using hypnotic storytelling. His approach is easily applied to any situation requiring influence.

Robin’s approach is the answer to helping you become an amazing hypnotist… even if… you’re just getting started.

Through trial and error… working with hundreds of his own hypnotherapy patients… Robin discovered how to make hypnosis easy using stories. He found out that hypnotic stories are like a ferry boat taking you across frigid waters to safe harbor.

You might be wondering “how” you can take advantage of Robin’s secrets.

Until recently, you would of had to pay a pretty penny studying with him one-on-one. The financial sacrifice was simply too much for most people.

How To Be A World Class Hypnotic

The Key To Effortless Hypnosis For Instant Influence 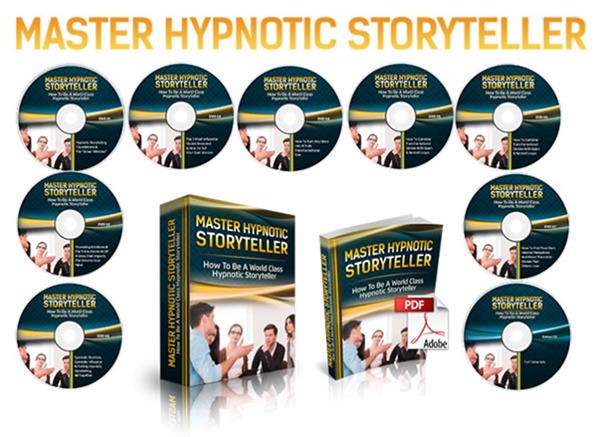 I guarantee you’ll never… and I mean never… find these practical secrets in any hypnosis course anywhere in the world.

Why do I say that?

Well, because no one teaches what Robin knows. What’s more, he and I teamed up on this project. Our objective was to combine his storytelling process… with… my covert hypnosis principles.

The result: A surefire system for easy hypnosis that leads to total compliance.

Here’s a small (very small) taste of what I mean:

Why “Reasoning” With Someone Is
The Surest Path To Non-Compliance

DVD 2: Provoking Emotions And The 5 Key Elements Of A Story That Impacts The Unconscious Mind

DVD 3: The 7 Most Influential Stories Revealed And How To Tell Your Own Version

DVD 4: How To Turn Any Story Into
A Truly Transformational Tale

DVD 5: How To Combine Transformational
Stories With Open And Nested Loops

How To Hide Post-Hypnotic Suggestions Within Innocent Stories

DVD 6: Creating Picaresque Adventures
And How To Scale Stories Depending
On Your Environment

DVD 7: How To Find Your Own Internal
Metaphors And Make Them Into
Stories Others Love